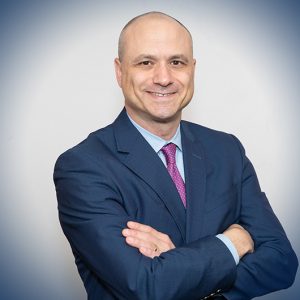 Upon completion of his one-year term as a judicial clerk in 1997, Mr. Alperstein accepted a position as an Assistant State’s Attorney in the Office of the State’s Attorney for Baltimore City, where he prosecuted thousands of cases in the district and circuit court. While in the Misdemeanor Jury Trial Unit, Mr. Alperstein was promoted to the Firearms Investigation Violence Enforcement (FIVE) Unit—a unit responsible for prosecuting shootings and violent gun offenders—and worked in conjunction with the United States’ Attorney’s Office. He was the youngest prosecutor to be promoted to this prestigious unit. The experience, knowledge, and most importantly, the relationships he gained during this time inspires a great sense of pride. Mr. Alperstein credits the many clients and referrals he receives today from court staff, prosecutors, and law enforcement personnel who became familiar with his work during his time with the State’s Attorney’s Office.

In 2001, Mr. Alperstein transitioned a successful career as a prosecutor to begin working with his father, Arthur S. Alperstein, and brother, Andrew I. Alperstein, at the family owned and operated firm, Alperstein & Diener, P.A. It was during this transition that Mr. Alperstein set his focus on growing the firm’s criminal defense, personal injury and worker’s compensation practice. The skills and practical, yet aggressive, approach to case management he gained from his prosecution days helped to evolve his practice into what it is today. His clients include people from all walks of life, including police officers, firefighters and public safety employees throughout the state of Maryland. Because of his relentless advocacy Mr. Alperstein is well known and respected for the quality of his work and professionalism.

Mr. Alperstein also represents high profile individuals and professional athletes in criminal, domestic and civil matters. Mr. Alperstein has been able to strike the essential balance between advocating for his clients’ best interests while managing intense media coverage and avoiding further sensationalism of the case. This is why many NFL players, lawyers, doctors and other professionals trust him to get the best result while maintaining their privacy.

Regardless of individual status, Mr. Alperstein treats everyone who has had the pleasure of working alongside him—client or opposing counsel—with respect and professionalism. He has spent over 18 years forging relationships with prosecutors, court personnel, law enforcement officials, judges and fellow attorneys, all of which he cherishes and credits with his success as an attorney.  These relationships, among his experience and aptitude for the legal profession, serve as evidence of why Mr. Alperstein was named a Rising Star in 2010, and 2011, and since 2013 has been consecutively voted by his peers as a Maryland Super Lawyer and is featured in Baltimore Magazine for this accomplishment.

Mr. Alperstein’s vast wealth of legal knowledge has garnered much reverence and trust throughout the legal community, the state of Maryland and the United States. He provides legal commentary to MSNBC, Washington Post, Associated Press, The New York Times, The Wall Street Journal, The Sun, and The Daily Record to name a few. Locally, Mr. Alperstein consistently appears on the four major television networks: WBAL, ABC 2, FOX 45, and WJZ, and he frequently provides commentary to WBAL 1090 AM.

Most recently, many local and national media outlets have called upon Mr. Alperstein to provide legal analysis regarding the trials stemming from the death of Freddie Gray. Freddie Gray was a defendant who died while in police custody; six Baltimore City police officers were criminally charged. Mr. Alperstein’s charisma and ability to explain very complex legal issues make him a trusted resource for journalists, analysts and media producers, and is why he is repeatedly asked to share his knowledge.

Aside from his contributions in the courtroom, Mr. Alperstein works effortlessly in furthering the legal community. He highly regards his position as an Investigator for the Maryland Board of Law Examiners. In addition to his position on the Board, Mr. Alperstein is active in various Bar Associations and committees, and is often asked to speak at continuing legal education (CLE) events and seminars. Mr. Alperstein also contributes to youth organizations, serving as a coach for a variety of sports, and in the past, on the advisory council for the Make-A-Wish Foundation.